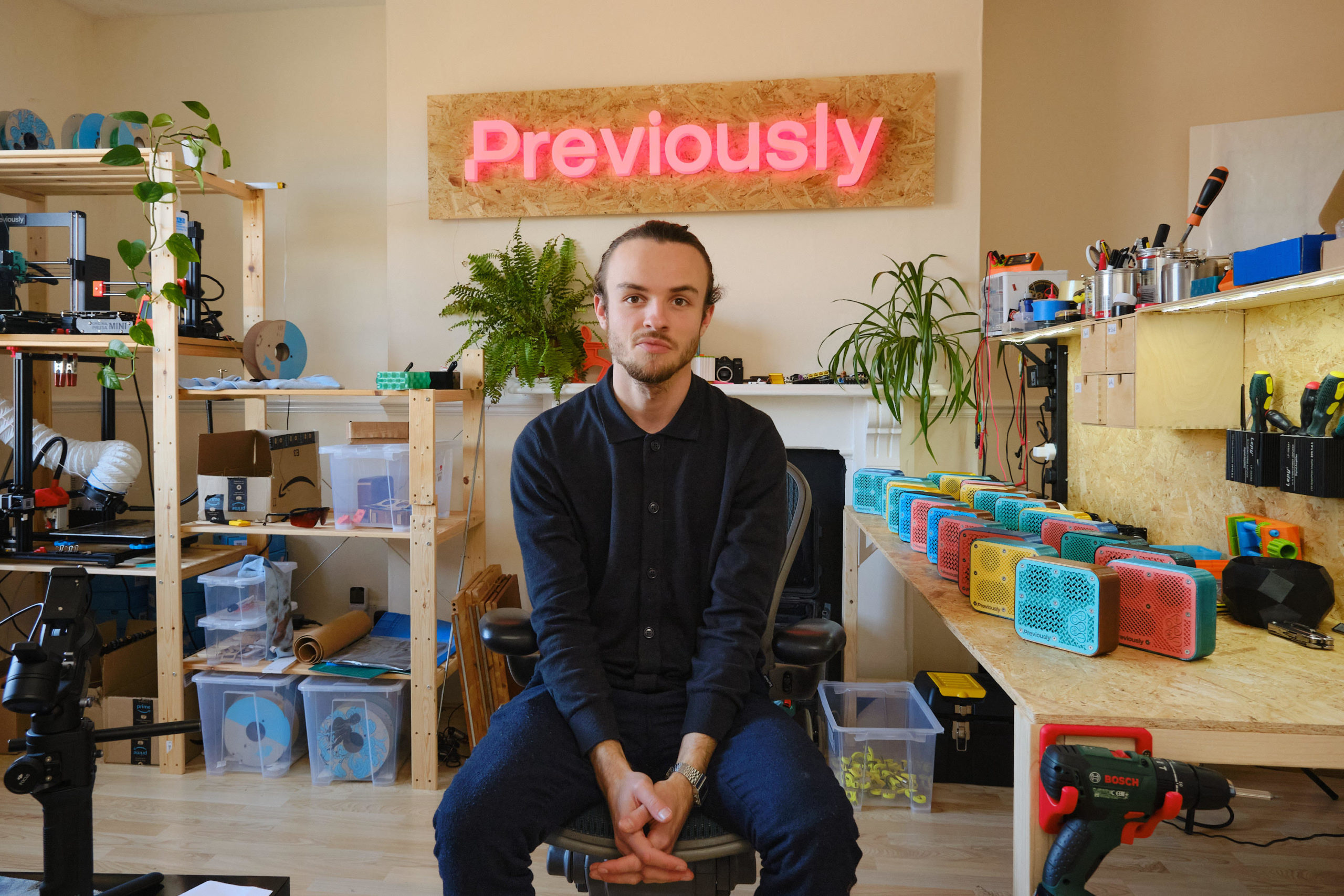 Finn Sims is the founder and CEO of Previously and NEF+ Class of 2019 alumnus. On a mission to eliminate e-waste, Previously designs what Finn calls “mindful tech” – sustainable products that will never have to end up in landfill as e-waste, but instead be recycled or repaired. Its lead product, at prototype stage, are the Previously Speakers 01 – repurposed from over 14 recycled plastic bottles, used speakers and compostable corks.

Breaking things for a mission

Since 10 years’ old, Finn had a household reputation for “breaking” all his toy gifts received during Christmases and birthdays to understand how they were built. That passion grew into a pathway towards entrepreneurship as he got older and started making  upcycled products for his family. It seemed natural for someone to eventually ask “why don’t you sell these?”

Finn ran with that suggestion and joined the 2019 NEF+ programme, but remained crystal clear about his deeper mission beyond just building a business. “I was never a visionary or entrepreneurial in that sense… I started this business dedicated to making the most sustainable tech on the planet. It’s been a lifelong ambition of mine to make stuff, but in an upcycled and thoughtful way.”

The best thing about NEF+ for me is the networking and being around other aspiring and experienced entrepreneurs, to really understand where you are in the world in the entrepreneurial space. It’s easy to feel imposter syndrome when you’re starting a business, so to be surrounded by other people that are just as vulnerable and hungry for growth is incredibly supportive.

Upcycling and eliminating e-waste now centres the decisions made at Previously. The tech sector is one of the biggest e-waste producers and Finn sees the opportunity to use design to get to the end consumer. Strategically, he shares, it’s about changing consumer behaviours and enabling them to make better purchasing decisions. Less fast tech, more mindful tech.

2020 from uncertainty to purpose

Last year, Finn experienced a “tear the band-aid off and just do it,” moment. He had lost his job of four years – which had been providing moral support for starting his business – and through that emotionally-challenging loss, decided that this was an opportunity to further develop Previously.

Finn had won the David Pearl Pitch Prize when he completed NEF+ in summer 2019 – he eventually used his £5,000 prize money to fund production of the Previously Speaker 01. Converting a spare room into a “micro factory” and investing in a 3D printer, it was there that the Previously Speaker saw over 60 product iterations to balance sound and test for durability. It also became his marketing studio: “I did product photography, made it look good, put it on the website. These were things I’d never done before, and it was all a reaction to the loss of my job.”

I realised that it’s not the idea or execution, it’s about how you need to grow to facilitate that and NEF+ was instrumental in that.

The Previously Speaker 01 is now in the hands of Finn’s first users, who are giving him feedback and insight. It’s a huge milestone since his early prototypes: “I remember bringing in one of my first prototypes which was a portable charger called ReLi and giving it to Georgie [Nightingall, a fellow NEF+2019 participant]. She said that it was a really cool product and asked about my next steps. I listed a laundry list of all the reasons as to why I couldn’t do it, and she told me ‘just do it’. I often think back to that moment.” Some of Finn’s closest friends are still from his cohort, where they’ve helped to keep an accountability loop.

Previously of the future

In 10 years’ time, Finn aims for Previously to bring measurable impact to the sustainable tech space. Starting with Previously Speakers was a personal and strategic move, since music is an integral part of consumers’ lives (and Finn’s too). However Finn intends to expand the product range with other variants that suit his upcycling model and can be made sustainably. This includes laptops, phones and tablets – some of the world’s biggest e-waste contributors that could really use a resilient innovator like Finn.

“I applied thinking that this programme would only last a couple of months, and that I’d just move on and start a business. But it’s been 3 years since applying, – 2 years since I’ve graduated from NEF+ – and that value is still growing and compounding. I completely underestimated the scale of the value that NEF+ provided and continues to provide.

If you’re hungry to learn and discover things about yourself, whilst bringing a great idea to life, NEF+ is an invaluable way to get there.”