Stuart (Class of 2017) is the founder of ManiLife, who always knew he wanted to do something a bit different but not necessarily what that was. Before joining NEF, Stuart studied Economics and Spanish at Bristol University. He achieved a first-class honours and received a job offer at PwC, which he deferred to travel to Argentina to work with a social enterprise. This was a turning point for him when he realised he wanted to run his own business.

Stuart spent a year in Argentina working for a social enterprise that distributed peanut butter around soup kitchens in Buenos Aires. It’s fair to say that he fell in love with peanut butter during that time, and realised that he needed to find a way to pursue this passion. Inspired by the principles of rigorous sourcing and craft roasting that he saw in single-origin coffee, he decided to apply those ideals to peanut butter and create something unique.

On his return to the UK, Stuart founded ManiLife – an award-winning craft peanut butter made in the UK. By sourcing the best (Argentinian) ingredients, meticulously roasting and carefully blending them, ManiLife creates what many are calling “the tastiest peanut butter on Earth”. Even though he had a business idea, he still very wasn’t sure of himself and, having taken the bold decision to quit a job in accounting to pursue his passion as sole founder, he really wanted to have a support network around him. He hoped NEF would be that support system for him and, joining the programme as a self-sponsored candidate in 2016, was pleased to find it was.

During his NEF year, Stuart grew ManiLife from a one-person, low-volume product (using a rented kitchen in Acton to make the peanut butter) to a fast-growing and distinctive brand in the UK market. In early 2017 he raised over £275,000 in crowdfunding, in turn breaking the Seedrs’ platform record for the fastest-closing food and beverage fund, grew his team and closed a number of high-profile distribution deals. ManiLife now employs six people and makes peanut butter in the same way that craft coffee is created. The products are 100% natural, ethically-sourced and unique-tasting.

Stuart persuaded Chris Dee, ex-CEO of Booths supermarkets to join as non-executive chairman in late-2017. Since then, Stuart has widened ManiLife’s distribution channels to include a number of leading UK retailers, including Selfridges, Gousto, Pod, Mindful Chef, M&S, Holland & Barrett, Amazon, Google and Ocado, as well as a large number of independent outlets.

“The early stages of ManiLife were super-shaky and NEF provided me with a lot of solidity and support, especially with contacts and raising money. The coaching was instrumental – Simon, was absolutely amazing. I’d go to him in a complete mess over decisions I’d made or was making, and would genuinely leave an hour later clear as crystal. I’ve kept in touch with Simon beyond the end of the programme” 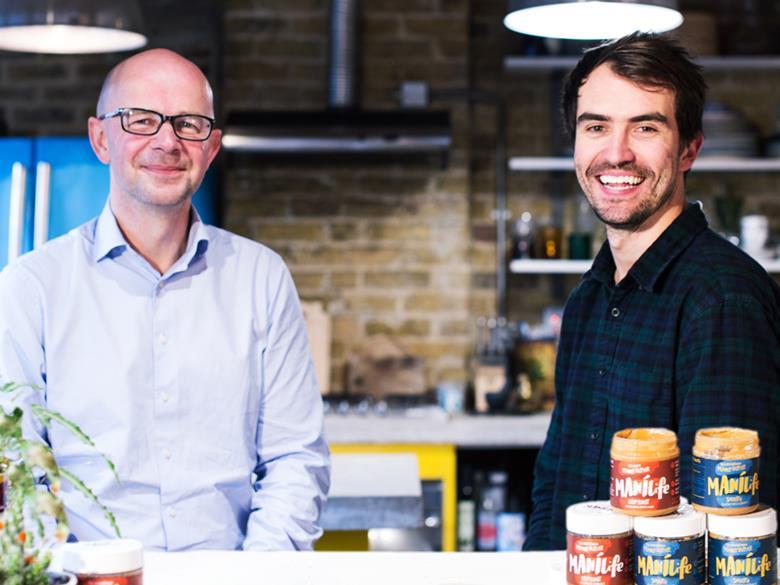