Julian is our NEF+ Class of 2021 alumnus and the Founder and CEO of Yendy – the beauty brand that’s been featured in Harper’s Bazaar and Stylist, and in 2022, won first place in CVC’s Young Innovator Awards. 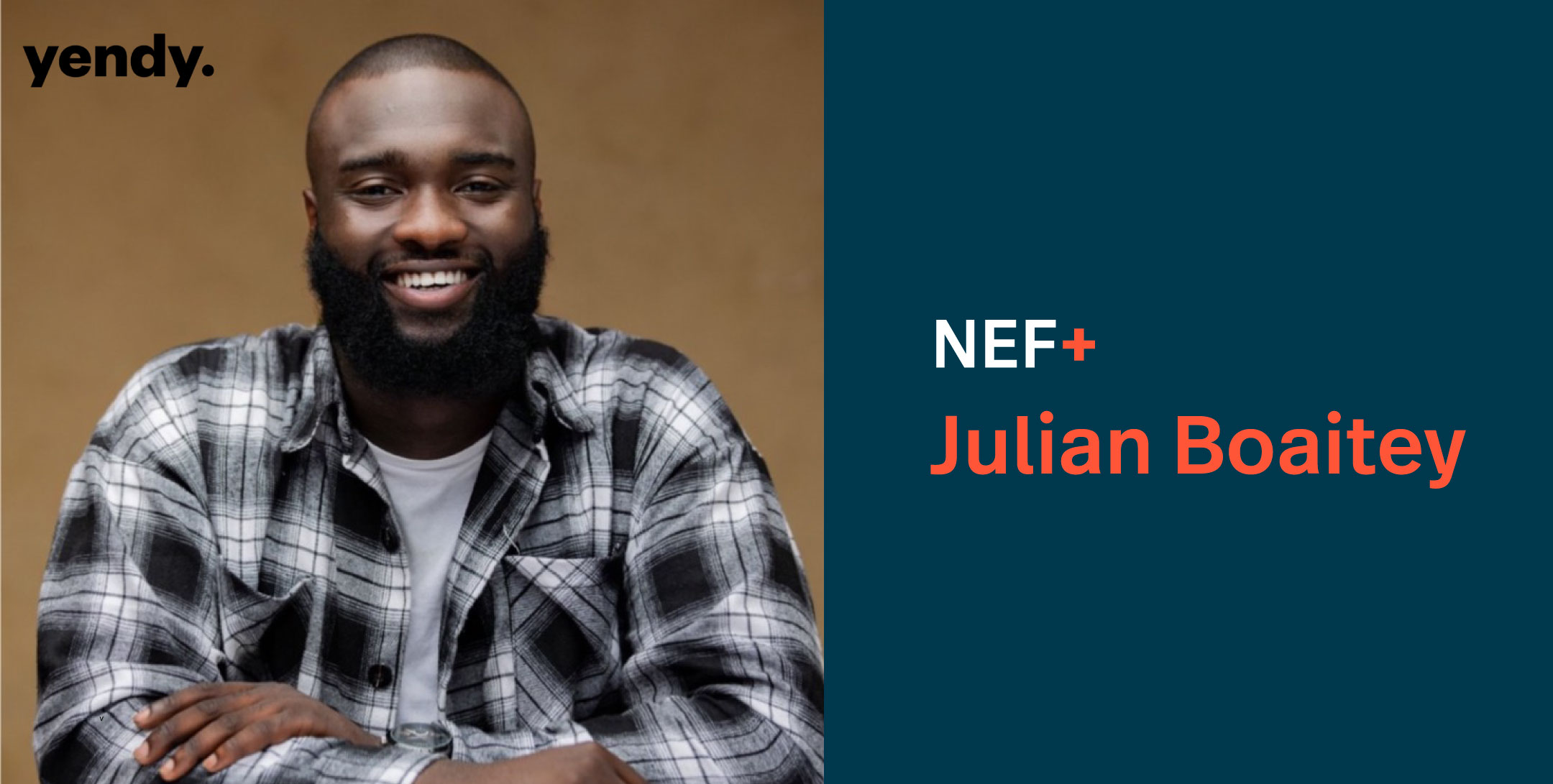 Innovation with a mission

Julian launched Yendy in November 2021, a beauty brand that bridges the gap between small-scale female farmers in Sub-Saharan Africa and a global beauty market that’s exploited them for decades. They produce high-performing, target-driven skincare using Africa’s most powerful and nutrient-dense superfoods – bringing science and active ingredients together innovatively.

A year since its launch, the brand has become a rising player in skincare: it’s been featured in Harper’s Bazaar, Stylist Magazine and The Evening Standard; it’s built a 15,000+ following across social platforms; it’s won a place in Courier Magazine’s (Mailchimp) Fresh Fund Programme; and in early 2022, Julian was awarded a grant at CVC Young Innovator Awards, delivered in partnership with CFE to support its NEF+ alumni.

Julian’s mission at Yendy holds a personal story. “[As kids,] my siblings and I grew up using Africa’s most powerful and nutrient-dense superfoods on our skin – my mother used to drown us in Shea Butter, Moringa and Baobab Oils, African black soap – the works.”

“However as I hit my teens, acne, hyperpigmentation, and dark spots plagued my skin, making me very feel very insecure and embarrassed. I wanted to go back to the incredible superfoods that I’d been raised on and create a brand that celebrated them. At the same, as a UK-born Ghanaian, I began to grow passionate about bridging the gap between small-scale female farmers in sub-Saharan Africa, and a global beauty industry that has exploited them for decades”

Getting Yendy to this place has taken many bold steps. After 5 years of working in operational and commercial roles across Monzo, BridgeU and Chip, Julian applied for NEF+ to take Yendy from idea to reality. He’d seen the likes of NEF+ 2018’s Kike Oniwinde (CEO and Founder, BYP) and 2017’s Darren Tenkorang (CEO and co-founder, TrimIt) further their ambitions through the programme and sought to do the same. Building his “entrepreneurship stack” and learning how to manage areas like finances and fundraising, he closed Yendy’s first investment round just halfway through NEF+.

Julian looks back on the NEF+ environment: “it was great working with other like-minded, intelligent and very, very ambitious people. I don’t like to feel like the smartest person in the room, and there was never a time in a NEF+ cycle when I felt that way…it just challenged me to stretch myself as far as possible and bring out the best [version] of myself.”

“NEF+ helped me to validate myself as an entrepreneur, as opposed to the idea of me ‘just owning a business. I now see everything as a learning process, and I know that I will be able to experiment with many things down the road.”

A year after graduating from NEF+, Julian clinched first place at CVC’s Young Innovator Awards, receiving a grant to accelerate Yendy’s marketing and production. Support from CVC has also helped him to establish new connections with the group’s portfolio companies, like beauty retail giant Douglas. “Having access and allyship from an organisation like CVC is important for us to scale and grow Yendy… telling any investor that we’ve had CVC’s support would show that we’re very serious and ambitious about what we want to build. It’s a strong differentiator because the skincare industry is oversaturated.”

Looking forward, Yendy is in for an exciting year. Alongside growing its 15,000-strong community, Julian aims to expand its product line in a bid to increase the average basket size. This is the result of a year-long endeavour to develop its supply chain, working closely with manufacturers to embed raw ingredients sourced from small-scale female farmers in Sub-saharan Africa and iterating its core products to suit customer feedback.

Presently going direct-to-consumer, Julian’s also begun mapping out their retail strategy (“do we belong in Wholefoods, or Sephora, or both?”). He hopes to pilot it across several brick-and-mortar stores locally, before thinking about their global reach. “I’ve managed to speak to other founders in the space that have managed to scale their businesses. It really gives me the confidence to know that if we continue to work really hard and keep our fingers crossed, we can achieve something really big.”